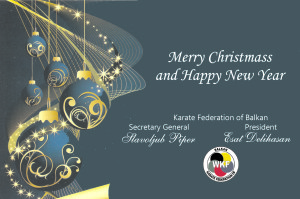 16th Balkan Cadets, Juniors and U21 Championship will be held on 11/13 December 2015 in Dunrovnik, Croatia.

On 9th of October 2015 Belgrade was the host of Karate Federation of Balkan Election Congress, where the presidents of the following karate federations took part: Bosnia and Herzegovina, Bulgaria, Montenegro, Croatia, Macedonia, Romania, Serbia, Slovenia and Turkey, while the consent of the Congress and the application was given by the representatives of Albania, who had justifiable reasons from which they could not attend.

The Congress elected the following bodies: the Executive Committee, the Supervisory Board, the President and four Vice-presidents.

President of Karate Federation of Balkan

16th Balkan Cadets, Juniors and U21 Championship will be held on 11/13 December 2015 in Dunrovnik, Croatia.

20th Balkan Children Karate Championship will be held on 29/31 May 2015 in Hreceg Novi, Montenegro.

ANNOUNCEMENT OF THE BALKAN CHILDREN CHAMPIONSHIP